Written by Simba Smp. So the best kept secret in Fort Portal finally went viral and inevitably the effects were felt all over the place. Only those who were lucky enough to be there can explain the total standstill as the SSL invasion led by our senior citizens marched into town. Fort Portal being a peaceful place that it normally is, was for once a hive of activity as the unprecedented sight of so many old people marched for a good cause. In other words the whole town was totally captivated as the breathtaking revolution unravelled in front of the locals’ eyes.

On the 15th June 2019, Simil Senior Life (SSL) charity finally held their much anticipated official launch at the Booma Grounds. Prior to the launch, there were so many questions about the agenda of the charity. Some queried about ‘the real motive’, some doubted our strength in depth for such an ambitious project and some were just too inquisitive about the whole thing. With the stage all set and with so many questions to be answered, the pressure to deliver was so immense and failure was definitely not an option. But only the SSL leadership and a few close loyal volunteers who bore the brunt can truly testify about the pre launch build up pressure. There were challenges ranging from the demanding workload, the logistics, dealing with the authorities’ demands, the costs involved and also deliberate impediments put in by self styled detractors. So getting through all those hurdles and coming through unscathed was a huge achievement to be proud of. In other words, just managing to get to the launch day required a lot more effort than what it seemed but thats a whole story for another day.

The launch day started with the senior citizens assembling at our three centres strategically located around the town of Fort Portal. These mobilising points were used to serve early breakfasts to make sure that all our elderly members were well fuelled up for the charity walk. But most importantly, after the breakfast, we carried out physical assessments to ascertain their fitness for the campaign walk to highlight their plight. These individual health checks were done under the tutelage of our health expert Mildred Wamara with support from two local doctors and a batch of volunteers. Then finally we ferried all the members using hired buses to the main gathering point, Booma Grounds, which was also the venue of the launch. After a quick introduction of the event, the march started from the venue, heading into town. In line with our strict health and safety regime, we had SSL volunteers, nurses, doctors and an ambulance on tow to spring into action if need be. In front of the march we had a police escort to clear the roads and provide security. The total walk from the venue into town and back was around 5KM. As had been wisely planned for, the few who fizzled out during the walk were put in the ambulance and taken back to Booma grounds. A trumpet band leading the march made the whole thing a spectacle to watch. Along the way traffic stopped, crowds waved to show support for the noble cause, passersby smiled and a lot of them gave high fives to the senior citizens who enthusiastically marched with so much passion written on their faces, regardless of the heat on the day. It was a joy to watch. 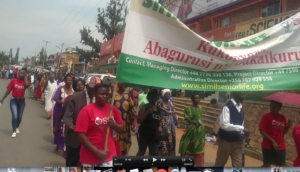 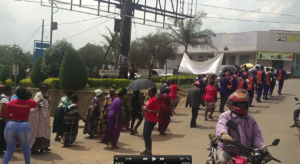 Entertainment was provided by B2C, the flamboyant Ugandan boy band that recently had the chart-topping hit Gutujja, featuring Rema. However, the lion’s share of entertainment was provided by the local cultural maestro Kigambo Araali and his magnificent traditional dancers. Perhaps due to the excitement generated and on the spur of the moment, a few interesting local acts also spiced up the event by jumping in to perform their various acts thereby sending the crowds into a frenzy.  In-between the entertainment, the crowd was addressed by the Managing Director, Simba Smp whose galvanizing speech included the need to work together for the betterment of our senior citizens, highlighting the operational challenges and the long term plans for the charity. The local born and bred Project Director, Mildred Wamara reiterated her understanding of the old people’s crisis through the experiences of her elderly mum and also emphasised the need to join hands to eradicate the neglection of old people. Then there was a highly informative brief on expert knowledge of fund raising ushered by Mr Christian, a Sustainable Development Consultant from Europe. The astute consultant further emphasised on the need to desist from relying too much on foreign aid and instead increase focus on local projects that also invest in local communities. The raffle draw also provided lighter moments as the colourful winners danced in celebration of their prizes. Finally, the event was summed up with a few wise words and a solidarity message from the shrewd Local District Councillor, Reste Balinda who was also the Honourable Guest of Honour on the day. 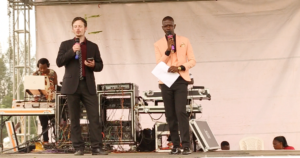 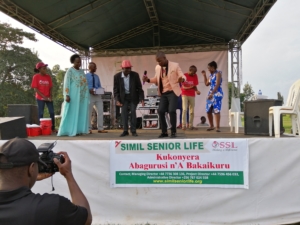 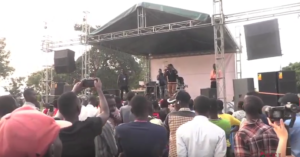 We know SSL still have a lot to prove, but without doubt we made a big statement of intent which will be talked about for a long time to come.  The impact of this launch was quite huge that the reverberations went beyond the local community and reached as far as the National Parliament in Kampala.  This is evidenced by the events that followed soon after the launch. A few days after our official launch which incorporated the elderly walk highlighting their plight, the Ugandan authorities apparently responded by calling for a conference of all old people in Fort Portal and our charity was hugely commended. This conference was hosted by the national speaker of Parliament, Honourable Rebecca Kadaga.  Furthermore, SSL takes pride in that the government sponsored conference was coordinated by Local District Councillor Reste Balinda, who had also been our Honourable Guest of Honour at the launch. Indeed, it is a testimony of our game changing prowess.

As we bask in the glory of the applauds received in our efforts to improve the lives of senior citizens, we also reflect on the negatives encountered along the way. It is sad to note that the SSL launch was almost halted by vendetta driven frivolous shenanigans against the campaign. Thankfully the relevant authorities dismissed those attempts with the contempt they deserved and the show was allowed to go on. People should be reminded that SSL Charity is a law abiding, fully registered entity with a clear agenda fully embraced by the beneficiaries and the community. Attempts to undermine the charity just to score personal points is retrogressive to the community and is sadly only going to affect the already downtrodden senior citizens who urgently need this service. SSL may still have a long way to go but no one should under estimate our potential and the amount of collective efforts made to get to this level. Before the iconic launch event, doom-mongers had tried to discourage us by saying it was a non starter project just because others before us had tried and failed in the elementary stages. Obviously having an idea is simple but putting it into practice is another matter altogether. To implement an idea not only requires capital, but it needs skills, strategy, relevant knowledge, investment of time and lots of passion for the cause. Currently we also feel that our efforts are being undermined by some unscrupulous community leaders who seem to only offer assistance only when there is personal gain for them. Surely a clear symptom of a much wider problem in the African community.  Running SSL has not only required rising above all the mentioned challenges but it has also come with a lot of personal sacrifices like expenses incurred travelling back and forth to Uganda to work on the ground and a lot of sleepless nights. Then we also have the capital investments to make things happen, the food eaten at our centres by the elderly and the huge workload which otherwise need well trained professionals. Huge sacrifices. Luckily we still have the zeal to do more, all we need is the support to carry on this noble cause. We once again urge those who can help to come on board and help in whatever way possible.

Let us all arise from selfishness, pettiness and create a happy community by working together for the good of everyone. As a brand we encourage engagement and are always willing to talk to anyone to resolve issues. Let us put ego aside and put our people first. Considering all the impediments thrown at us, we have to be very proud of our progress.  Our critics may ignore the good so far and focus on what we have not achieved yet but we are not worried about that. Those with wisdom will know that Rome was not built in a day. The most important thing is we are heading in the right direction and our ever increasing and happy membership is a testimony to our appeal on the ground. But make no mistake, there are bigger and better initiatives brewing behind the scenes. Those strategies will be unleashed in due course. Indeed, we know we have not arrived yet but for now we celebrate being commended in the higher echelons of the Ugandan parliament as well as seeing our stock rising against all odds.  The latest appeal of our works has seen a UK broadcaster, LoveWorld TV dedicating a whole season showing the SSL story under their Living Boldly series. You can follow this on Sky TV, Channel Sky 585 or Freeview IPTV Channel 258. As we approach the end of the year, plans are afoot to host a fundraising event in London, so stay tuned for updates. If you have ideas and/or want to support us please get in touch at info@similseniorlife.org

Simba Smp is the Managing Director of SSL. You can contact him on simba@similseniorlife.org

THE COVID-19 AFTERMATH!!
Scroll to top